@WePublicHealth is a revolving Twitter account managed by Croakey Health Media. In March, Mark guest hosted and took a left turn to spend the week examining women’s cricket, public health and the many things in between. 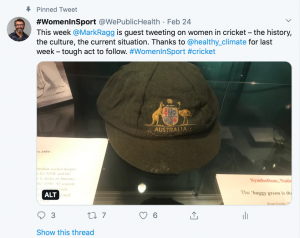 Why choose women’s cricket? Lots of reasons. Cricket is a big part of life for my family – my two daughters, Elli and Eva, have both played. So, too, my three sons – Jack, Conor and Charlie. So, too, my father Wal, my two brothers Peter and Graham, and my sister Debbie.

I played myself – every summer from age 5 to 30. And loved every minute of it. Though when I stopped, I realised just how long a weekend could be if you weren’t in whites.

And there’s equality. I grew up with a comfortable life, but journalism exposed me to corrosive effects of pervasive inequality. Supporting women’s sport is hardly revolutionary, but it’s another way to chip away at inequality. As my partner Catherine says: ‘Playing cricket is a feminist act’.

And there’s also the idea that playing sport has benefits … I’ll come to that another day.

And we’ll also look at the commitment of young cricketers, the support of senior cricketers, nutrition, exercise and the interplay between sport, health and climate change.

This week in Canberra, 100 or so young women will gather for the under 15 National Championships. My youngest daughter, Eva, is one of them, playing for NSW Metro, against teams from ACT/NSW Country, Victoria Metro and Country, SA, WA, Tasmania and Queensland. You can follow the championships here. 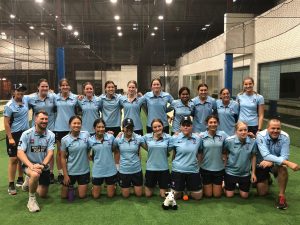 And the Women’s T20 World Cup started last Friday. Australia are favourites, although England and India aren’t far off. Perhaps New Zealand too. You can follow the World Cup here.

The path to the nationals

The NSW girls all play seniors cricket on Sundays – some in the under 18 Brewer Shield and some in first or second grade against adults. The Brewer Shield is named after Dot Brewer, a long-time administrator who died last year.  She’s pictured here with girls from the Sydney Cricket Club. 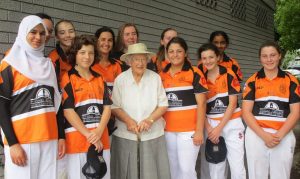 Most also play on Saturdays with junior clubs, some with girls, some with boys. Junior cricket for girls is relatively recent – girls’ teams weren’t around when my eldest daughter Elli, now 29, was Eva’s age.

They all played an under 15 rep comp at the start of the season named after Margaret Peden, a former Australian captain who did much to drive the renaissance of women’s cricket in the 1930s.

For most, the introduction to rep cricket came in the under 13s in a comp named after Mollie Dive AO, former Test captain and all-round sportswoman.

Most train twice a week with the state team, then once a week with their club. That’s on top of the two or three games a week. Many are sored and tired and carry minor injuries much of the time.

The path for these girls to get there has been fun – nobody spends so much time playing cricket without enjoying it – but long.

Eva’s journey is probably typical. She played with boys for the first few years, and did well, and was treated respectfully by team-mates and opposition. Very little sexism, and plenty of support.

She moved to girls’ cricket to get access to rep teams and better coaching. Her previous coaches, such as me, had been passionate but limited.

Her first year in girls’ cricket, aged 11, was bewildering. She played u13s and u15s for a junior club, Summer Hill, under 15 rep cricket with Canterbury-Wests, and trained with senior women at Sydney Cricket Club. It took me a full year to work it out.

Then the next year she played u13s, u15s and u17s for her junior club, u13s for the rep team and u18s for the senior club. She was also selected to train through winter with the Cricket NSW academies, which provided excellent training and fantastic motivation.

The support is fantastic – I’ll come to that later.

History of women in cricket

1807: Christina Wilkes of Kent is recorded as being the first cricketer to bowl overarm

1874: First recorded game of women’s cricket in Australia, at Bendigo 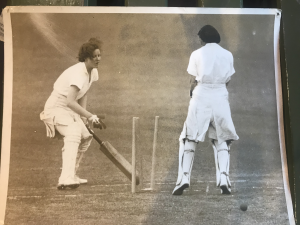 1948: Australia tours New Zealand for the first time – Australia captained by Mollie Dive (who paid for her way by being a scientist at CSIRO). 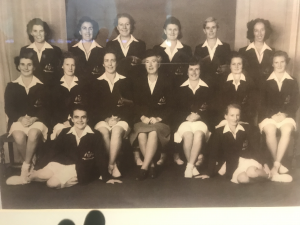 1957: Betty Wilson becomes the first cricketer of any gender to score a century and take 10 wickets in a Test

1977: First team from India tours Australia – the photo shows both teams together 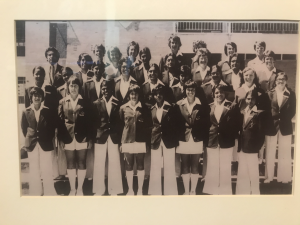 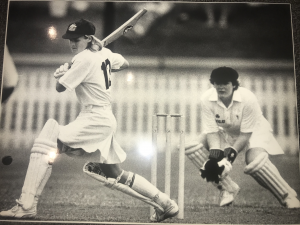 1997: Belinda Clark becomes the first cricketer to score a double century in a 50-over match (223 not out v Denmark)

2001: Michelle Goszko, current coach of the NSW Metro under 15 team, scores 204 not out on debut v England

2017: Ellyse Perry scores 213 not out v England at North Sydney Oval in the first day-night Test.

And some more views on cricket and its history from:

With support from cricketing royalty.

If it’s not an insult to call someone royalty. Which I think it actually is. Sorry Mel.

One of the most striking things as a parent is seeing the support the senior women give the young girls. Senior players repeatedly turn up to present caps, to coach, to give talks, to cajole, to role model. It’s fantastic.

The senior players model healthy eating, fitness, community support, giving to others, positivity, mutual support, commitment and more. My examples are local, but these women are not alone.

Here’s Alex Blackwell at the Sydney Test at North Sydney Oval in 2018. A few months later she’d run a coaching clinic for Marrickville players. The girls saw her signing autographs at the end of the day and yelled: ‘Hey Alex, remember us!’ She did. 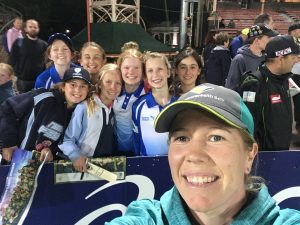 Here’s Rachael Haynes presenting their caps to an under 15 team for Sydney Cricket Club. 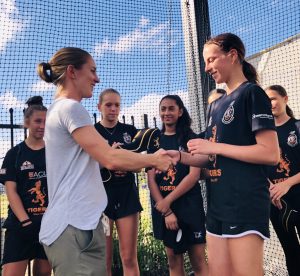 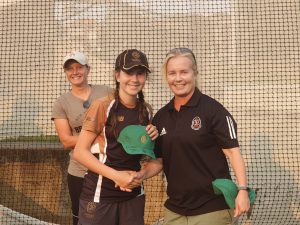 And here’s Alyssa Healy, on a day off from the national team, running drinks for an under 18 team. 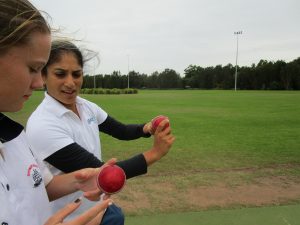 The younger girls are always thrilled to have the senior players put so much back – they make sure the promising young players can see what’s possible. They talk of the team, and the club, and the camaraderie, and the dedication needed.

And blokes too. People like Greg Healy, who could have eased up on youth cricket once his daughter Alyssa reached the national team.

But Greg has spent years working with girls and young women, mainly through Sydney Cricket Club, but elsewhere as well. He has a way of listening not all that common to men who have played first-class cricket.

Here he is, coaching the Sydney Cricket Club under-18 team, walking the oval before the match with the captain, as he does each week. In this case, it’s my daughter Eva, then 13. ‘So what do you think, champ?’ he says each time. 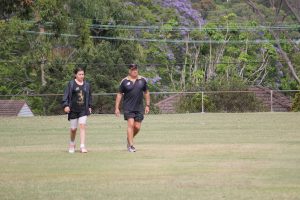 The meaning of sport 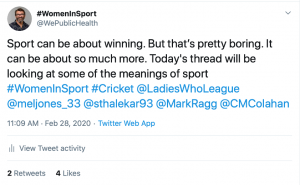 For me, sport was a way into learning about racism – through South African cricket and rugby selection policies and through the writings of Colin Tatz, a South African émigré who became professor of politics at Australian universities and director of the Australian Institute of Holocaust and Genocide Studies.

Colin, who died recently, wrote about genocide in Australia, South Africa and Germany.

Colin used sport to shine a light on racism. Here’s a tribute to his life from the ABC. And here are obituaries and memories from Australian Jewish News and Plus61JMedia. And here is Colin Tatz on his love affair with sport. And of the last articles he had published, in Croakey, on suicide. 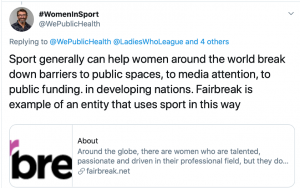 A Fairbreak XI came to Australia last week and played three games at Bradman Oval. You might have heard that our Department of Home Affairs had refused a visa to Botswana cricketer Shameelah Mosweu as they deemed her a ‘flight risk’.

Following delightfully negative coverage, Home Affairs reversed its decision and Mosweu made a rushed trip from London, where she was studying.

Australians are doing their bit to help cricket grow. Former keeper Julia Price is coach of the USA. Lisa Keightley, who played for Australia from 1995–2005 and coached Australia in 2007–08, coaches England.

The good and the bad of cricket

And there is the risk of corruption. Cricket has been tainted by match-fixing scandals, largely led by bookmakers. Just recently, a 15-year-old was approached by someone who claimed to work for Australian cricket, but was probably a bookie.

Of course, some people can’t get over their prejudices.

But sport can also mean a lot for those subjects to those prejudices.

But it’s pretty clear that for many, sport has benefits, such as to their health. From one meta-analysis: The health benefits of sports ‘are achieved primarily through physical activity’. …  Other benefits include ‘psychosocial development of both young and old, personal development, along with later onset and lower consumption of alcohol.

‘Those who play sports have a higher level of physical activity later in life, and through sport, knowledge of nutrition, exercise, and health can be developed.’

‘Negative effects include the risk of failure leading to poor mental health, risk of injury, eating disorders, burnout, and exercise-induced gastrointestinal tract discomfort. In sport, there are unfortunately also reports of physical and psychological abuse.’

Cricket seems to be a relatively low-injury sport, compared to some others. The Australian Institute of Health and Welfare released data this week showing football and cycling are the sports that lead to most hospitalisations.

But in terms of rate of hospitalisation per participant, it was motor racing, then rugby (league and union combined), roller sports, equestrian activities, Aussie rules … cricket came in 13th.

Poor nutrition plays a part in tiredness, poor concentration and an increased risk of injury.

The NSW girls have access to a nutritionist, who gives them talks and information and is on the end of the phone or email for questions.

They’re told to avoid anything with added protein, as they can’t be sure it’s not contaminated with steroids and other banned substances.

And they’re told to avoid supplements at all costs, unless prescribed by a doctor and approved by the Cricket NSW doctor. Even for something as simple as vitamin C.

These girls, at age 13 to 15, now fall under the aegis of the Australian Sports Ant-Doping Agency. They are told to check any drugs, medications or substances they may take. They can be drug tested at any time. 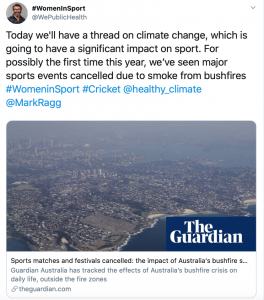 Increased temperature will lead to increased risk for sportspeople, a change to traditional seasons and conditions, and more money for maintenance. Changes to rainfall patterns will lead to harder or softer surfaces, ground closures and in some areas, reliance on irrigation. Extremes in weather will lead to damage and destruction of facilities, delays and cancellations of events and increased risks to participants and spectators.

The unpredictability of the weather will see disruptions, cancellations, increased costs and loss of revenue. 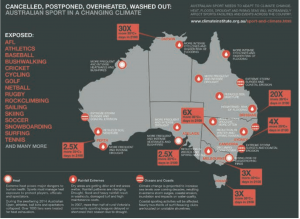 And as well as climate change affecting sport, the reverse is also true. Land clearing for sports facilities can affect biodiversity. Water and electricity are needed for lighting, heating, cooling and maintenance of sports facilities. Large sporting events produce a lot of waste. And all the services that go with sports increase carbon emission.

Postscript: NSW Metro went down to Queensland in the final of the under-15 girls’ national championships. A great game.

This article was first published by Croakey and is cross-posted with permission.

Does anybody have a copy of "The Bugalwena Service: Our story of a partnership in health" written in 1996 by Pauling, Salisbury, & Bellear. Can't find it for sale, and local library closed. Hoping to borrow or buy, with thanks