The pressure on healthcare workers from coronavirus is growing in Australia, with the news that a nurse who works in the intensive care unit at the Royal Adelaide Hospital testing positive to the virus this week. SA Health said 23 close contacts, predominantly hospital staff, had been told to self-isolate.

Healthcare workers around the world have been at high risk for developing COVID-19 due to the roles in seeing people who are ill, testing them, caring for them and providing support services for them. That means not just doctors and nurses, but also pharmacists, physiotherapists, social workers, other allied health professionals, paramedics and other ambulance staff, cleaners, clerks, technicians, food service staff, porters and more.

Many healthcare workers have died in Italy, China, UK, Spain and more. At one stage in Spain, 14% of those infected were healthcare workers. In many cases, such as here and here, shortages of personal protective equipment (PPE) have been noted.

As of a week ago, 157 healthcare workers in Victoria had acquired the infection. Healthcare workers are in self-isolation in north-west Tasmania following the closure of two hospitalsafter an outbreak. And Paul Worley, Australia’s National Rural Health Commissioner, has noted a similar situation in Kalgoorlie.

There are concerns over the supply of protective personal equipment. Aboriginal community controlled health organisations were particularly concerned about coming shortages of PPE, as were rural health services. A survey of hospital doctors found guilt, fear and confusionabout the use of PPE.

In South Australia yesterday, more than 600,000 face masks were withdrawn from hospitals because of concerns over the level of protection provided. 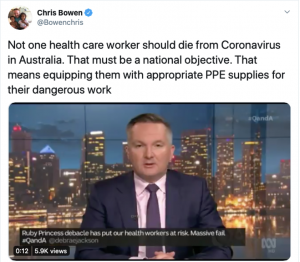 There are concerns in the UK that many of the early deaths among healthcare workers have involved people of colour.

Dr Chaand Nagpaul, head of the British Medical Association, has urged the British Government to investigate whether black, Asian and minority ethnic people are more vulnerable to COVID-19, and if so, why.

Among the many deaths of healthcare workers in the US, data from the Centers for Disease Control, which it acknowledges is far from complete, suggests that deaths and infections among healthcare workers broadly represent the demographic makeup of the workforce.

Routine reporting of occupation benefits all

The CDC says: “These preliminary findings highlight that whether [healthcare workers] acquire infection at work or in the community, it is necessary to protect the health and safety of this essential national workforce. … Improving surveillance through routine reporting of occupation and industry not only benefits [healthcare workers], but all workers during the COVID-19 pandemic.”

Writing in The Guardian, young British doctor Rosie Hughes described the anxiety she felt over her health, but also over the health of others.

“Did they give it to me? Or did I give it to them? I’ll never know, but I stay up at night wondering.”

This article was first published by Croakey Health Media